CrossFit Kyoto took part in the Spartan Race again this year. Said to be the world's best obstacle course, one of them was hosted in Nagoya on the 21st this month! 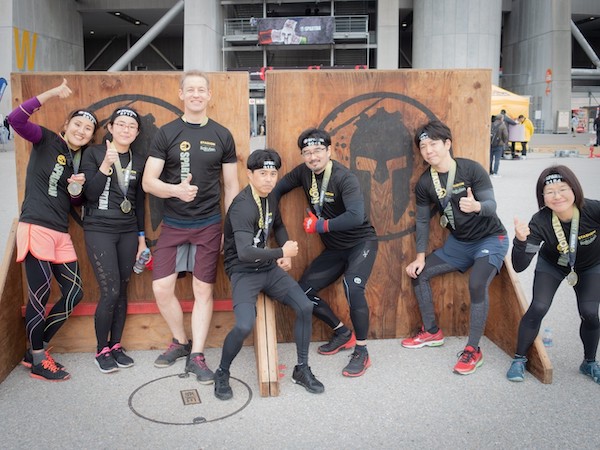 Thanks to Misul’s amazing organisation skills this year's CrossFit Kyoto Spartan team of Kazumi, Mai, Masashi, Moeko, Susumu and Russell met up on a frosty Shinkansen platform at Kyoto Station, instead of the usual Kita-ku training gym, on Solstice Saturday, December 21st. 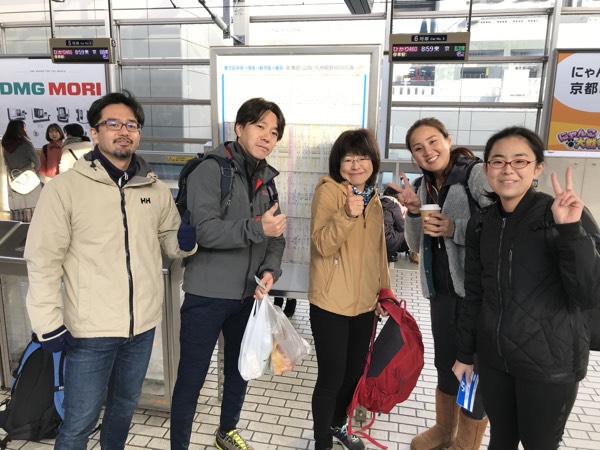 About 2 hours later we reached Toyota stadium, ogling the rope climb and spear throw obstacles on the river bank as we approached. 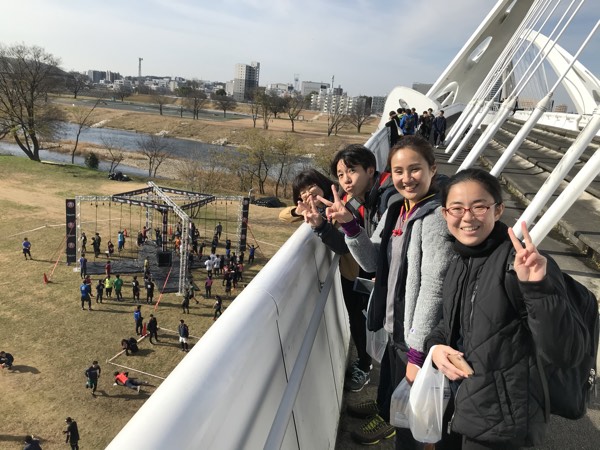 After meeting up with Ryo, who had arrived by car, the first obstacle turned out to be finding the reception, which was hidden away inside the arena. As even the queue to get in was based on our 13:00 start time we took a sunny picnic break on the banks of the river while waiting to register. 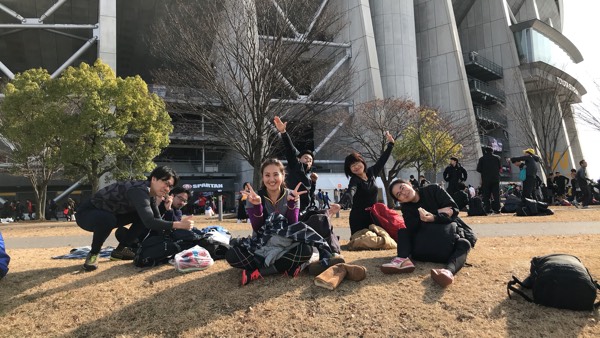 Once we were allowed in to the stadium and got through the registration process we played an interesting game called “How many bands does it take to run a spartan race?” The answer is four: first, a head-band showing your race number, second, an electronic receiver to record your time; third, a race start-time band; fourth, a bag check receipt band! 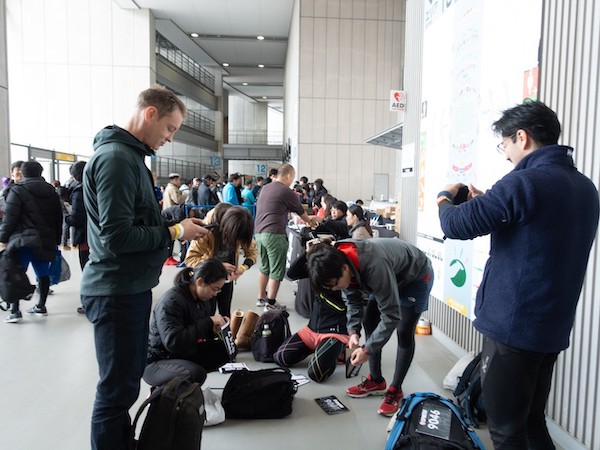 After getting dressed up with all these bands, undressed into our race gear, and de-vested of our baggage (receiving band no.4 in the process) we had a mere 15 min before the start of our race. 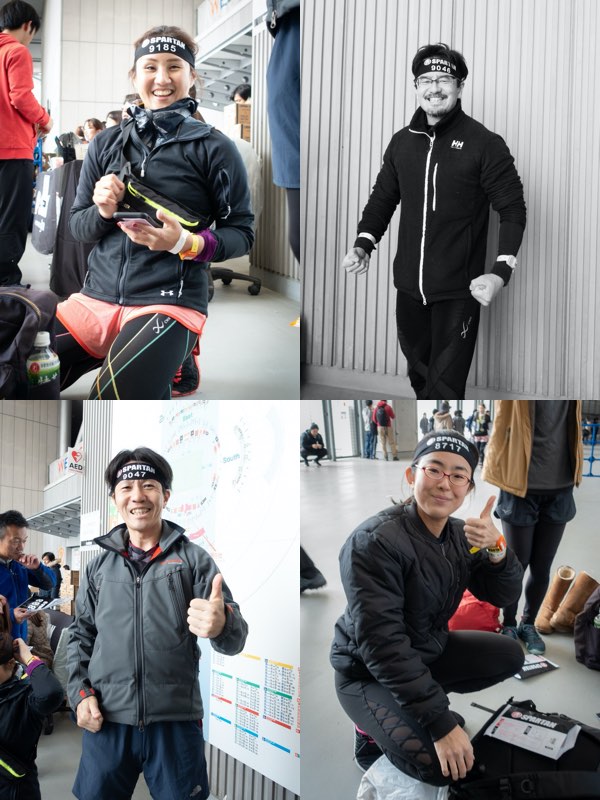 Even to get into the start area there was a small wall to climb, which everyone cleared with flying colours. Then 3-2-1-Go and we were off, at a gentle jog, except for Ryo the tireless camera man who sprinted ahead to capture shots of our departure (and more of the action later on). 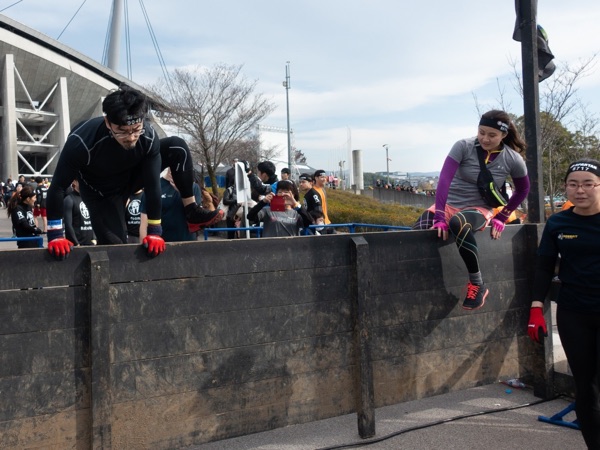 The first thing to take our breath away was not an obstacle, but running out through the players’ entrance into the stadium itself. I can hardly imagine what it must feel like to run out into that cavernous amphitheater with thousands of people looking down on you. 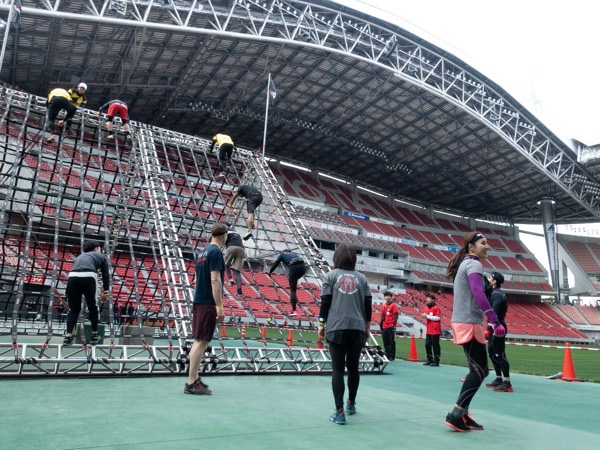 Then the adventure began, it was up, down and around the humongous arena: climbing walls and slamming balls, box jumps and rope jumps (real lengths of rope, like the ones we use for climbing at CrossFit Kyoto), carrying sandbags and water bags, and stairs, always more stairs staring us in the face after each mini workout-like interlude.This all served as an enjoyable warm-up before we headed out into the December sunshine again for some more “traditional” Spartan race obstacles. 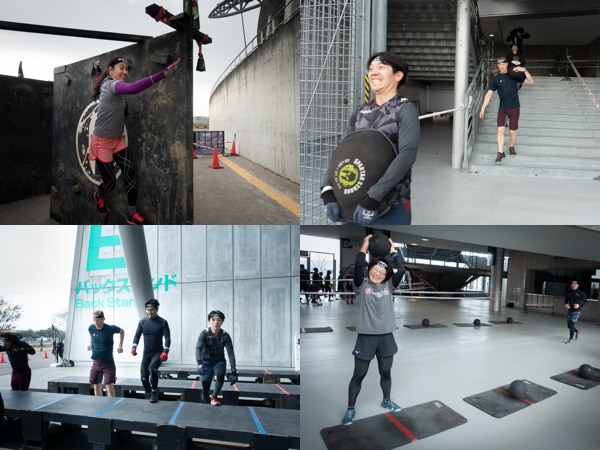 Up to that point our team was burpee free, as everyone had succeeded in both the physical and mental challenges, but it was not to last. The atlas stones required a different technique to regular deadlifts and everyone was able to adapt and overcome. The sled drag was not a drag for anyone used to pull-ups, ring rows and power cleans at the CrossFit Kyoto box. Pulling a rope hand over hand to hoist a sandbag 5m or more into the air caused our first failure and first injury (a blistered thumb). We shared out the 15 burpee penalty within the team and ran on. 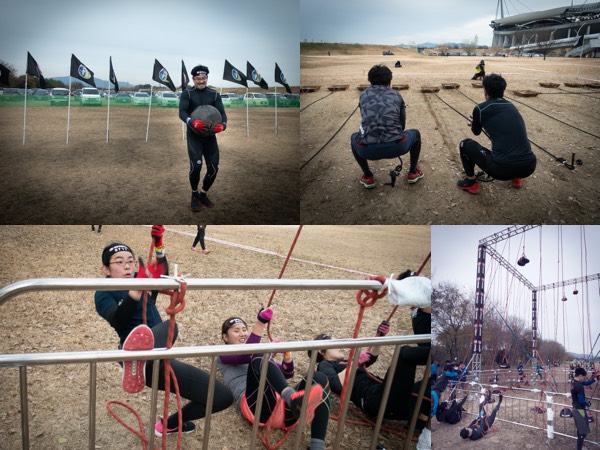 The rope climb obstacle appeared from under the bridge. Despite some personal training instruction and dedicated practice it caused a few more failures, mainly due to the thin and slippery nylon rope. 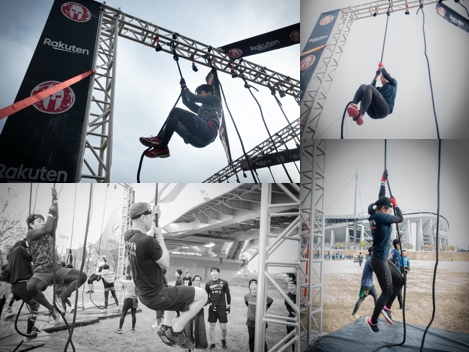 The monkey bars, and their inconsiderately wide spacing, provided us with more opportunities for team burpee practice 🙂 and another injury as Ryo just missed the final bar and crashed into one of the supports, slightly grazing his shin. 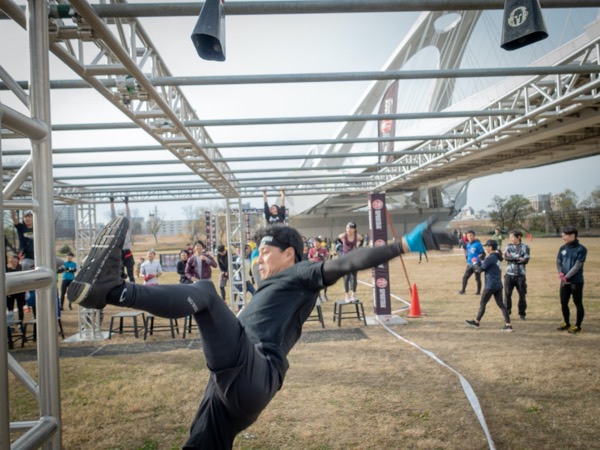 Closing in on the final few obstacles we approached the spear throw with a combination of trepidation and excitement. Would we be triumphant hunters or a team of burpee specialists? It turned out to be the latter, with only Ryo and Susumu succeeding in hitting the target. 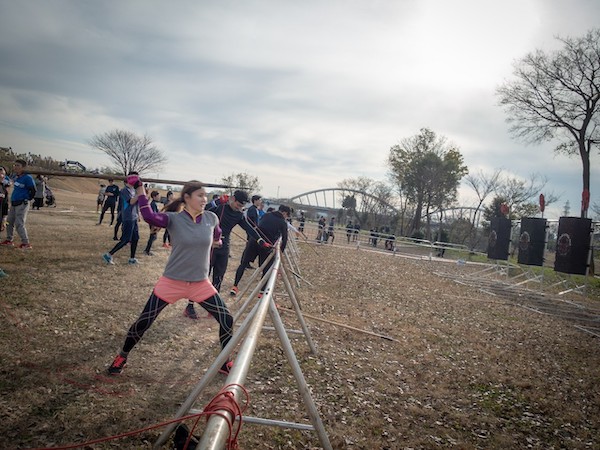 After everyone successfully navigated the 7ft (2.13m) wall our final obstacle was the “multi-rig” (a version of monkey-bars with rings), 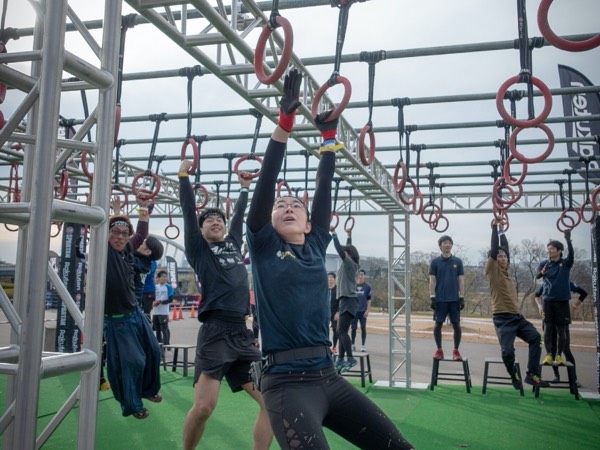 which lead to a final total of just 3 burpees per person before we passed the finish line to receive our t-shirts and medals. 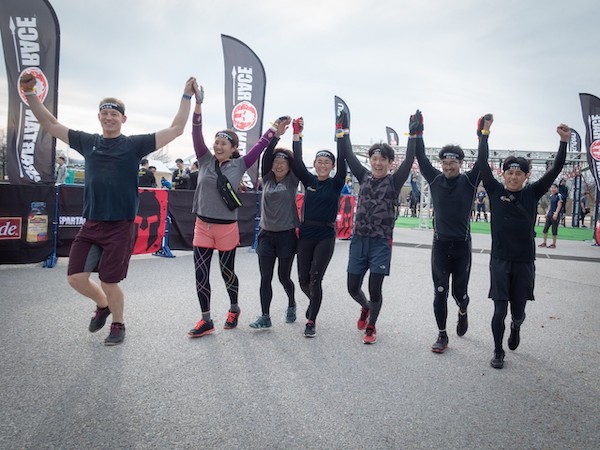 Our merry band was gradually divested of our collection of bands, retrieved our luggage, changed and headed out, tired (“man I feel it in my legs” being a common phrase) but utterly content with our exertions and the experience as a whole.

Let’s make it a CrossFit Kyoto Spartan excursion, with team T-shirts and all, who’s up for it?

Trial classes are available any time. Please apply online via the button below.

Crossfit Kyoto, training and sports gym, is located in Kitaoji and a mere 13 min subway ride from Kyoto station.

← The Never-Ending-Story of our do-it-yourself shower WOM (workout of the month! =:o) ~ Part II
Crossfit Kyoto is a gem! →

Experience the overall atmosphere of the facility. Beginners welcome!