Recently we posted a video on instagram (see it here https://www.instagram.com/p/CU7hLsThq3b) in which Tatsuro and I were doing American kettlebell swings. 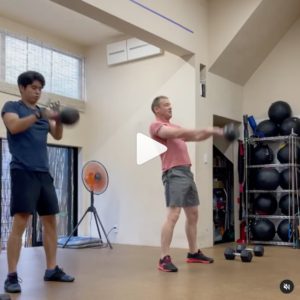 Some of our members asked about the difference in style between our swings. You’ll see that I keep my arms basically straight throughout while Tatsuro bends his arms on the way up and down.

Why is our technique different? I do my swings like an extended version of the Russian kettlebell swing, in which my arms stay straight but end up overhead instead of at shoulder height. Tatsuro’s swing is more like a two handed kettlebell snatch, the kettlebell is kept closer to the body and the arms punch up at the end to finish the movement.


Which is better? Let’s look at it by comparing the Russian swing with the KB snatch. Both are great for developing power from the hips & legs, and both can be used in conditioning workouts as you have undoubtedly noticed during CF Kyoto WODs.


With the Russian swing there is more focus on the lower body and the abs have to work to prevent the kettlebell pulling you forward. With the snatch, because the kettlebell travels about twice as far per rep, we accomplish more work which translates to burning more calories. In addition, snatches put a much higher demand on the shoulders due to the necessity to stabilize the kettlebell overhead.


There is a great deal of argument on the internet about whether we should do American style swings at all. The narrow handle of a kettlebell means that putting both hands overhead is difficult in terms of shoulder mobility. On the other hand, the American swing does have an advantage in terms of shoulder stability over the kettlebell snatch. You are much less likely to lose control of a kettlebell controlled by two hands than just one. I have never hurt myself doing American swings but I have hurt my shoulder with heavy kettlebell snatches. Additionally, if you are not competing in the CrossFit Open then going completely overhead is not necessary, so the shoulder mobility issue doesn’t come into play.


What we want to see in any swing or snatch is power coming from hingeing of the hips and legs, a neutral spine maintained throughout the movement, and control of the shoulder joint so it is not pulled out of position by the weight of the kettlebell at any time.


So where does this leave us in terms of the difference between Tatsuro’s swing and mine? I have to say, after looking at the evidence his style may be better than mine. Keeping the kettlebell close to the body probably helps control the shoulder and makes for a more efficient arc in the swing. On the other hand, the timing of the pull and lock out with the arms might make it more difficult for some people to pick up. There is also the danger that with this style the hip hinge turns into more of a squat - so we’ll have to practice before the next KB WOD 🙂 Are you looking forward to it? We’d love to hear your feed-back afterwards!

Experience the overall atmosphere of the facility. Beginners welcome!